Eight Treasure Tea, called Ba Bao Cha in Chinese, is originally from Yunnan, China and is considered to have medicinal properties and health benefits in Chinese medicine. It is believed promote energy, circulation, tonify the liver, stimulate blood production, and to replenish ‘chi’. Ba Bao tea can be found in many big cities and every teahouse.

The meaning of Ba Bao Cha (八宝茶), a famous Chinese herbal tea originating from Yunnan China, is “eight treasures,” referring to the many ingredient of the tea. It is also called GaiWan tea. The equipment is the same to the SiChuan style GaiWan tea: A small dish-like tray, a cup and a lid attached firmly together to form a whole tea set. Green tea is mostly used for Ba Bao tea. The other ingredients include rock sugar, raisin, medlar, sesame, longan, walnut, jujube, and many other sun dried fruits and nuts. The drinker simply puts all of the ingredients together into a cup and adds hot water. Each brew of the Ba Bao tea has a different taste: the first brew is the taste of tea; the rock sugar will melt mostly in the second brew so the tea tastes sweet; during the third brew all the sun dried fruits will release their special aroma. A good Ba Bao tea can serve up to 5 brews. 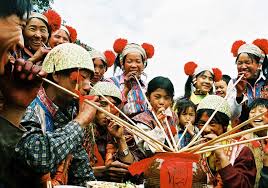 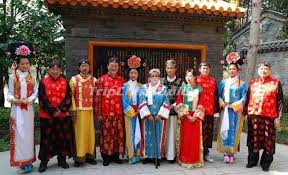 For over a thousand years, in china, Traditional Eight Treasure Tea was coveted by royalty and only touched the lips of China’s hoity-toity.

In 1996, the tea became available to the public and is served in many restaurants in China. In these restaurants, customers are invited to sit back and let their tea waiter delight with his extraordinary tea pouring techniques. With the infamous long-spouted teapot, he will dazzle. Watch for his Crouching Tea~Hidden Teapot move or the “dragon asking for directions.”